The coach journey was really fun.  On our bus we got to sing, play games and talk to each other, as long as we didn't stand up.  We were allowed to tell jokes to each other and our coach driver told us lots of dad jokes!   AJ

We stopped at Avon Heath Country Park where there were big slides, a zip line, swings, a rope climbing frame and lots of space to play.  There were toilets there too - and they were clean! 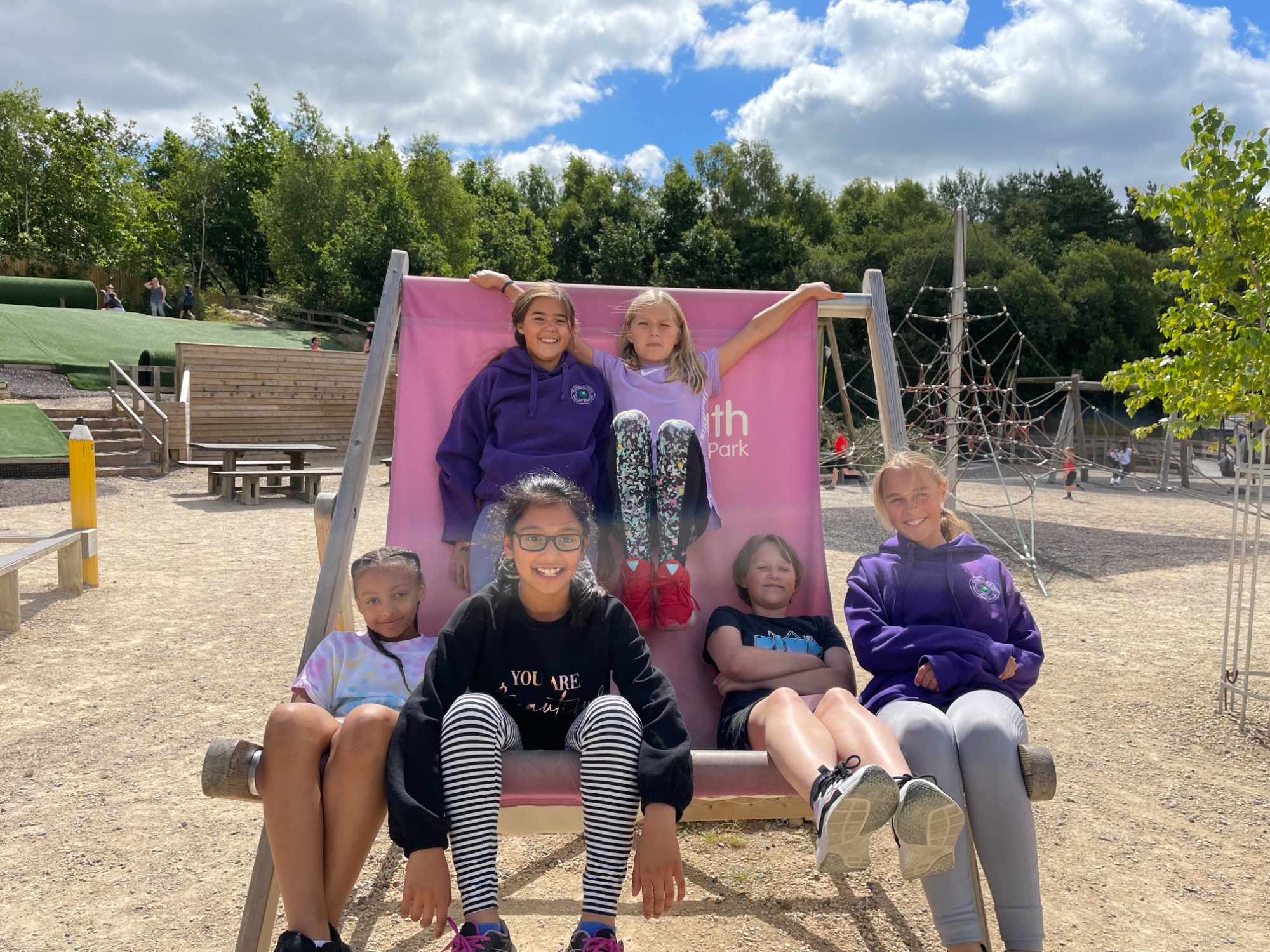 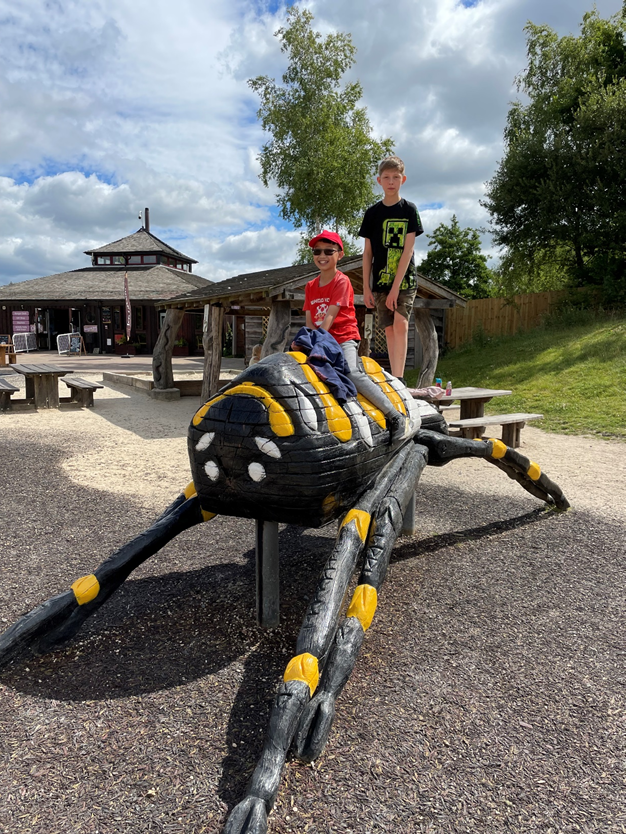 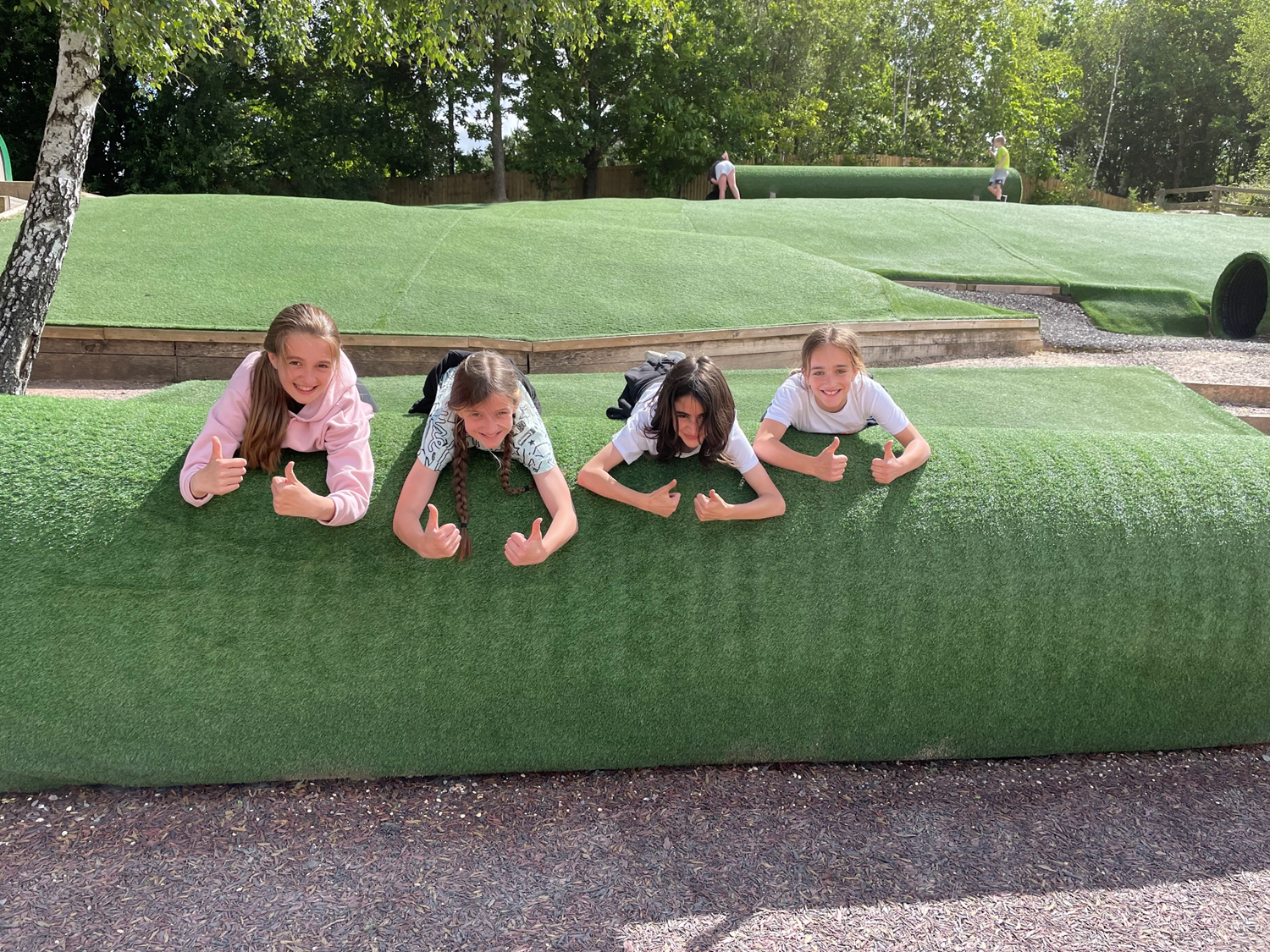 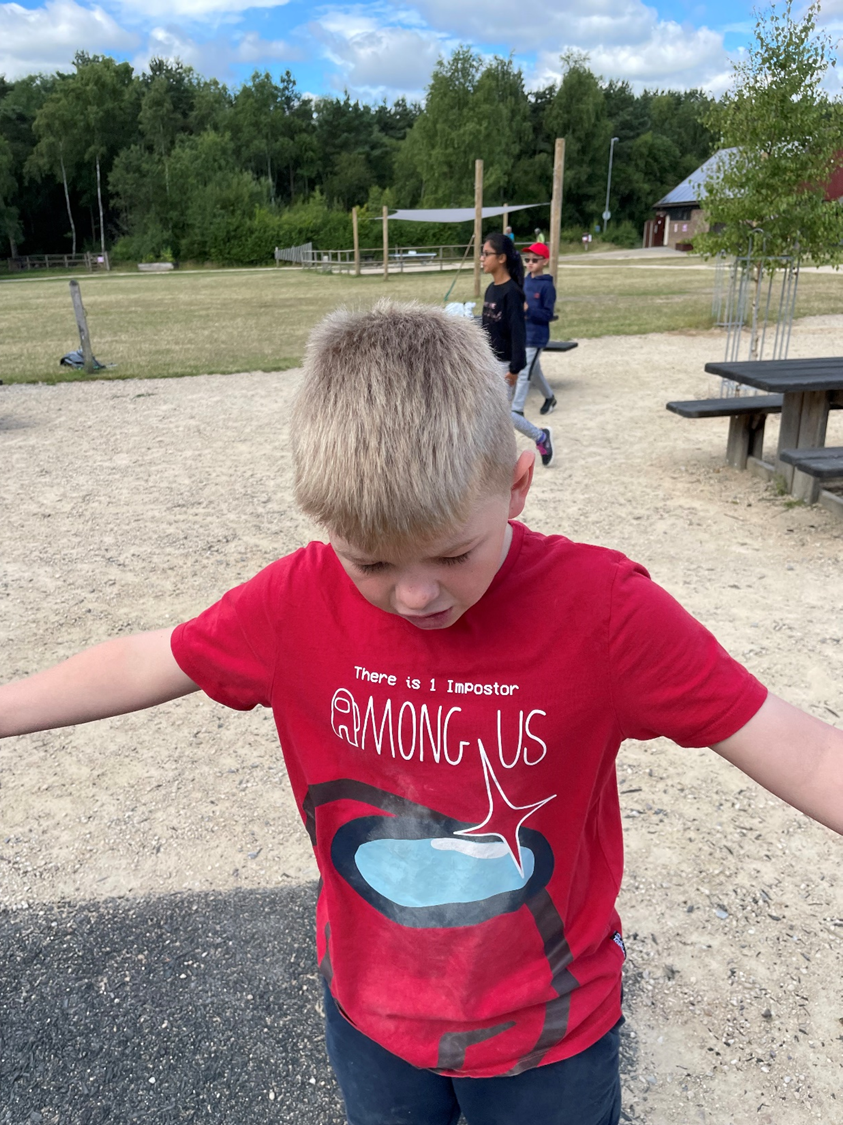 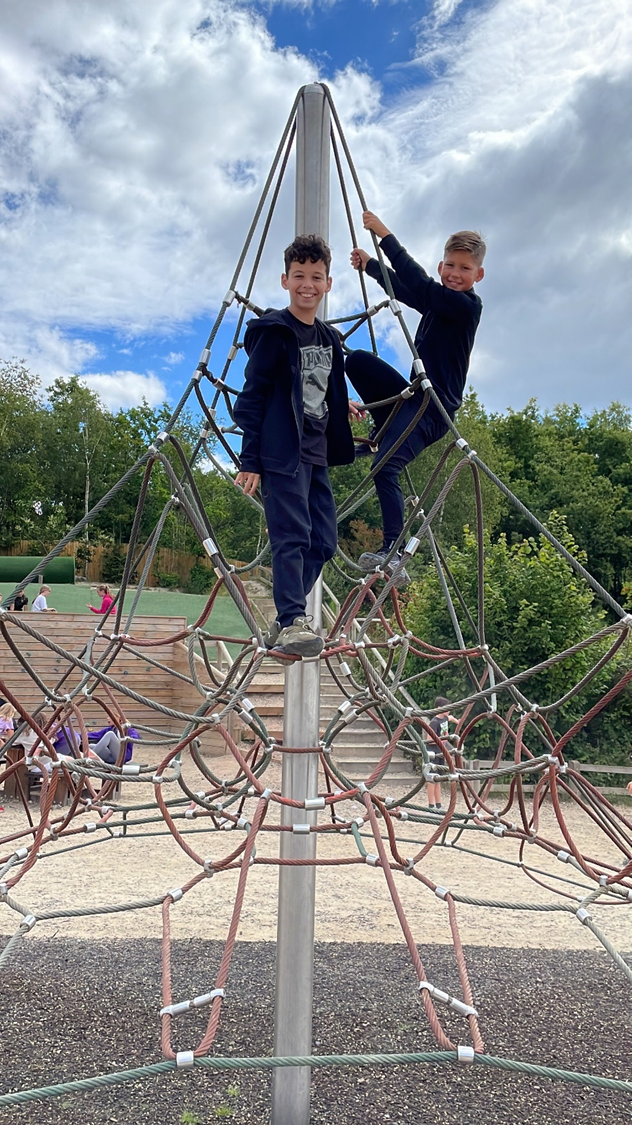 When we arrived the instructors showed us around the site; we did a fire drill - we weren't all quick and quiet enough first time so we had to do it again - we nailed it the second time!  After that we got told our rooms and we set them up.  We went to the field to have fun activities - we played valleys and volcanoes and other problem solving games and we played floor is lava.  In one there were two planks and some ropes and we had to lift our legs together to move the planks along. 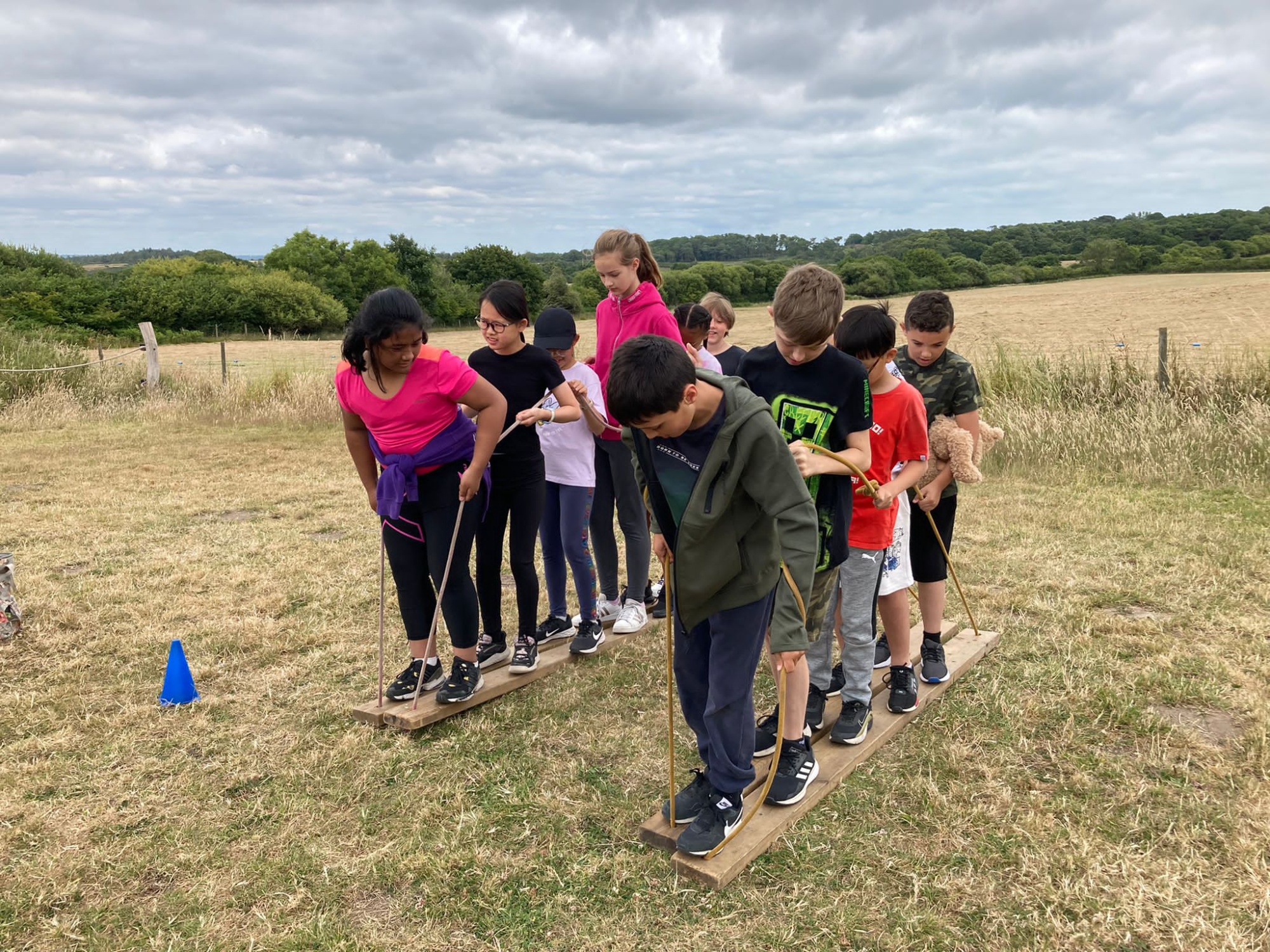 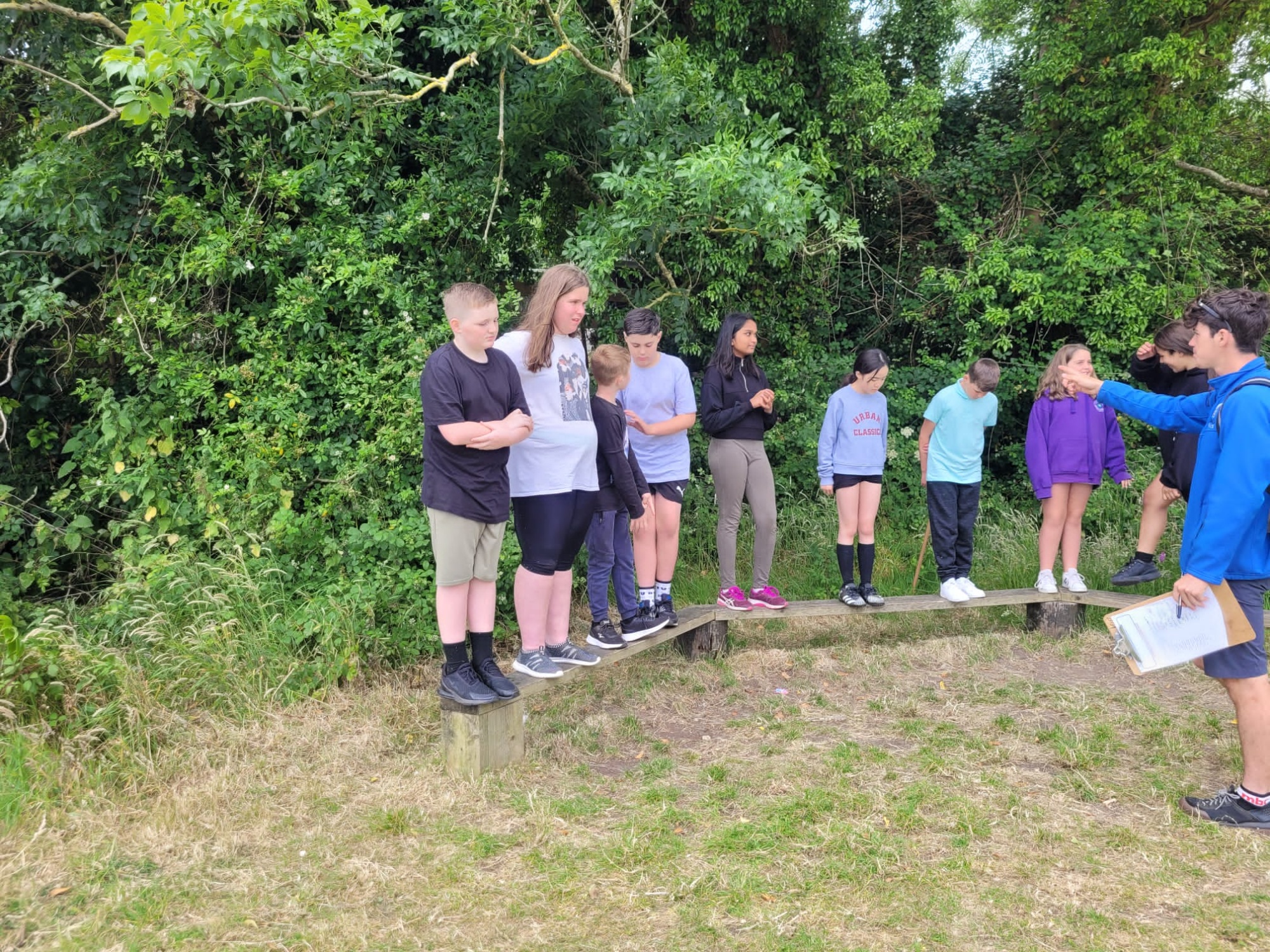 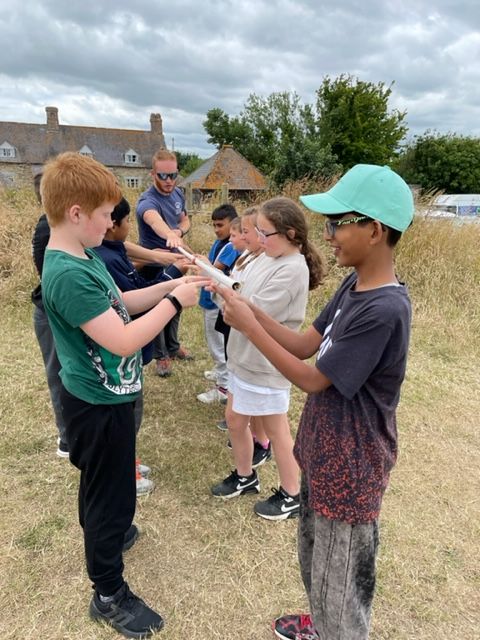 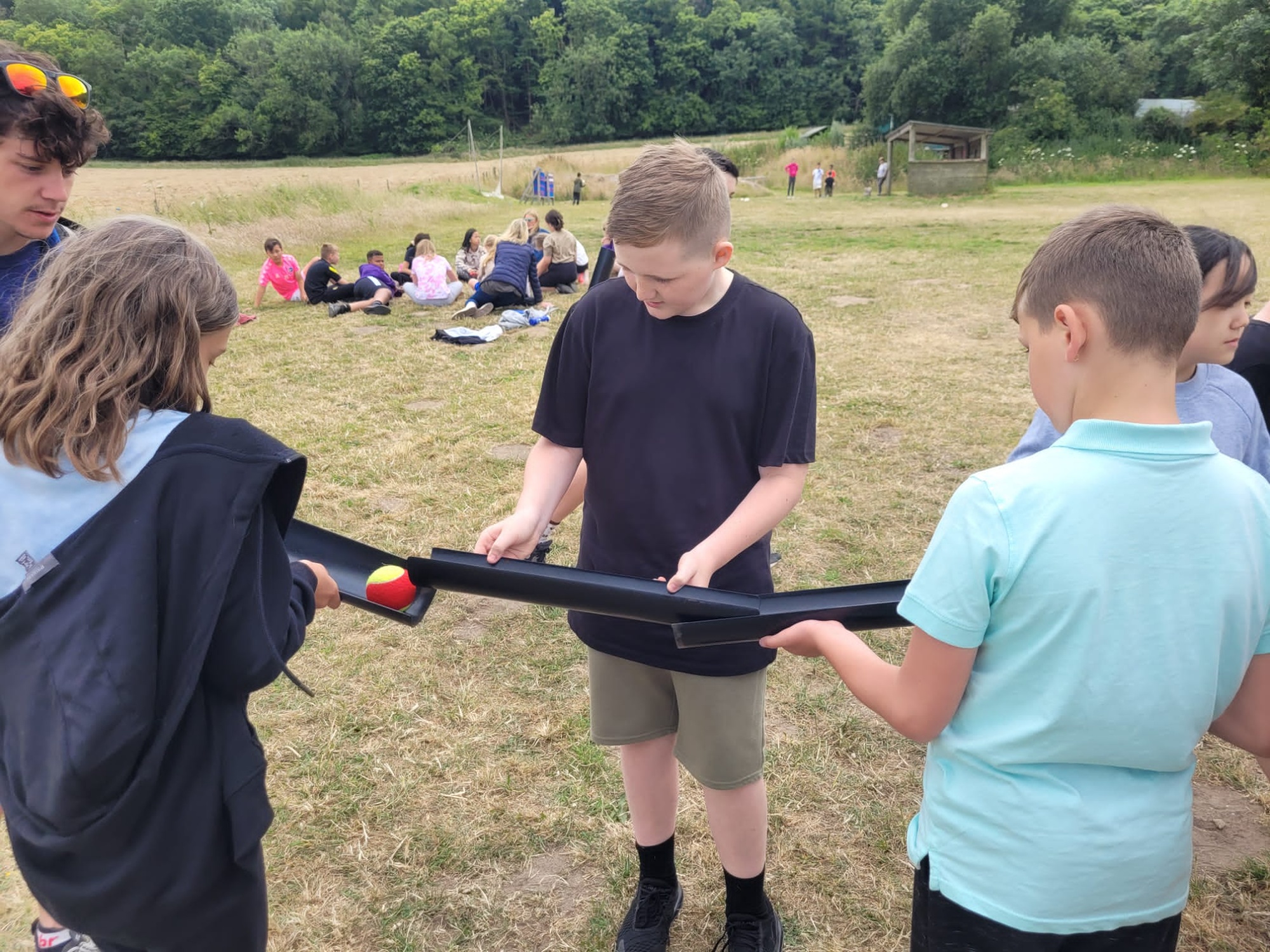 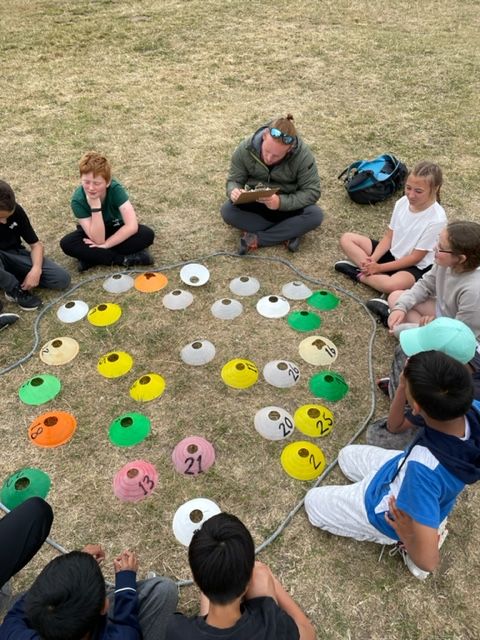 After the activities we had 45 minutes to make our beds (that was fun!) 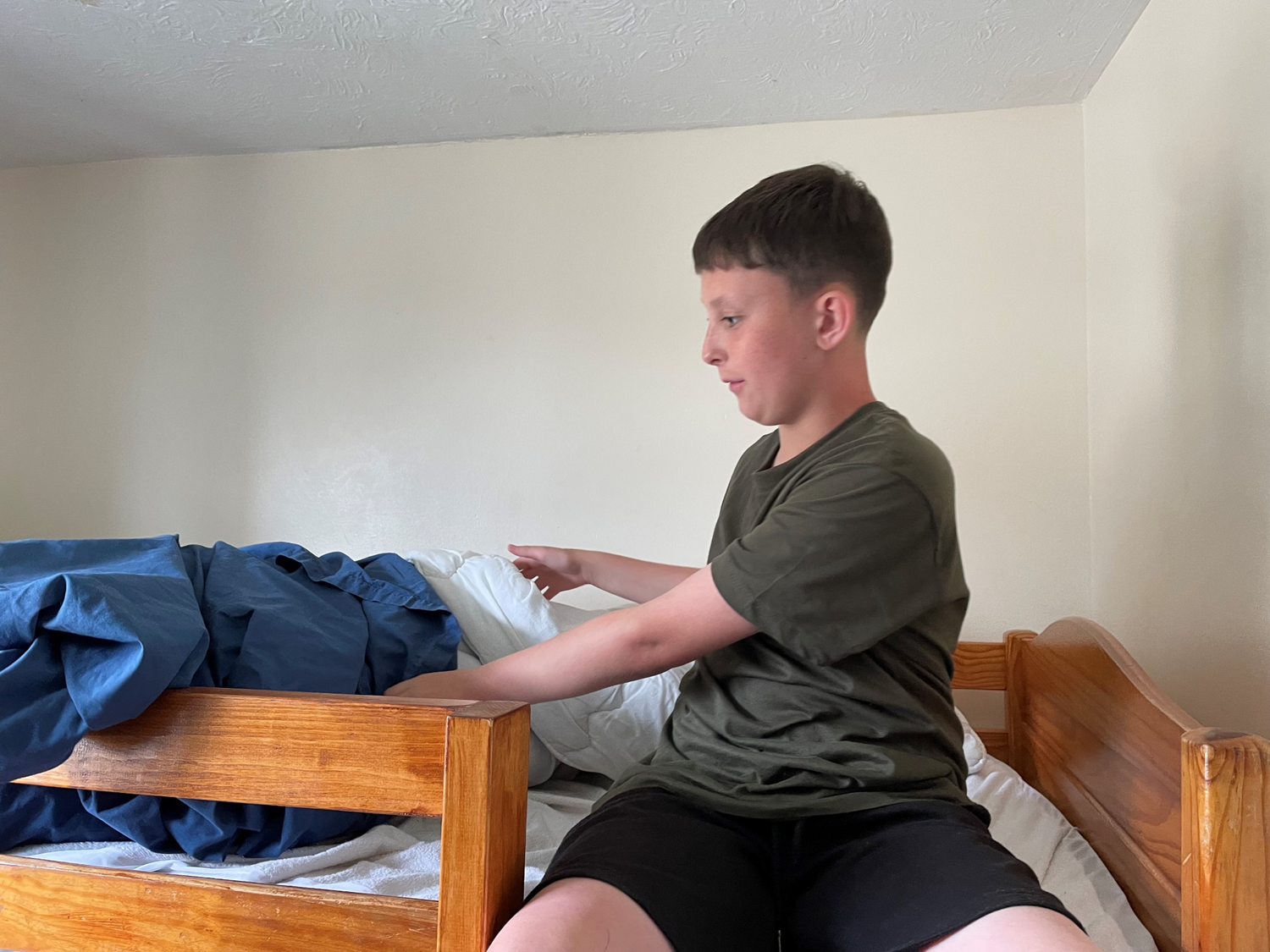 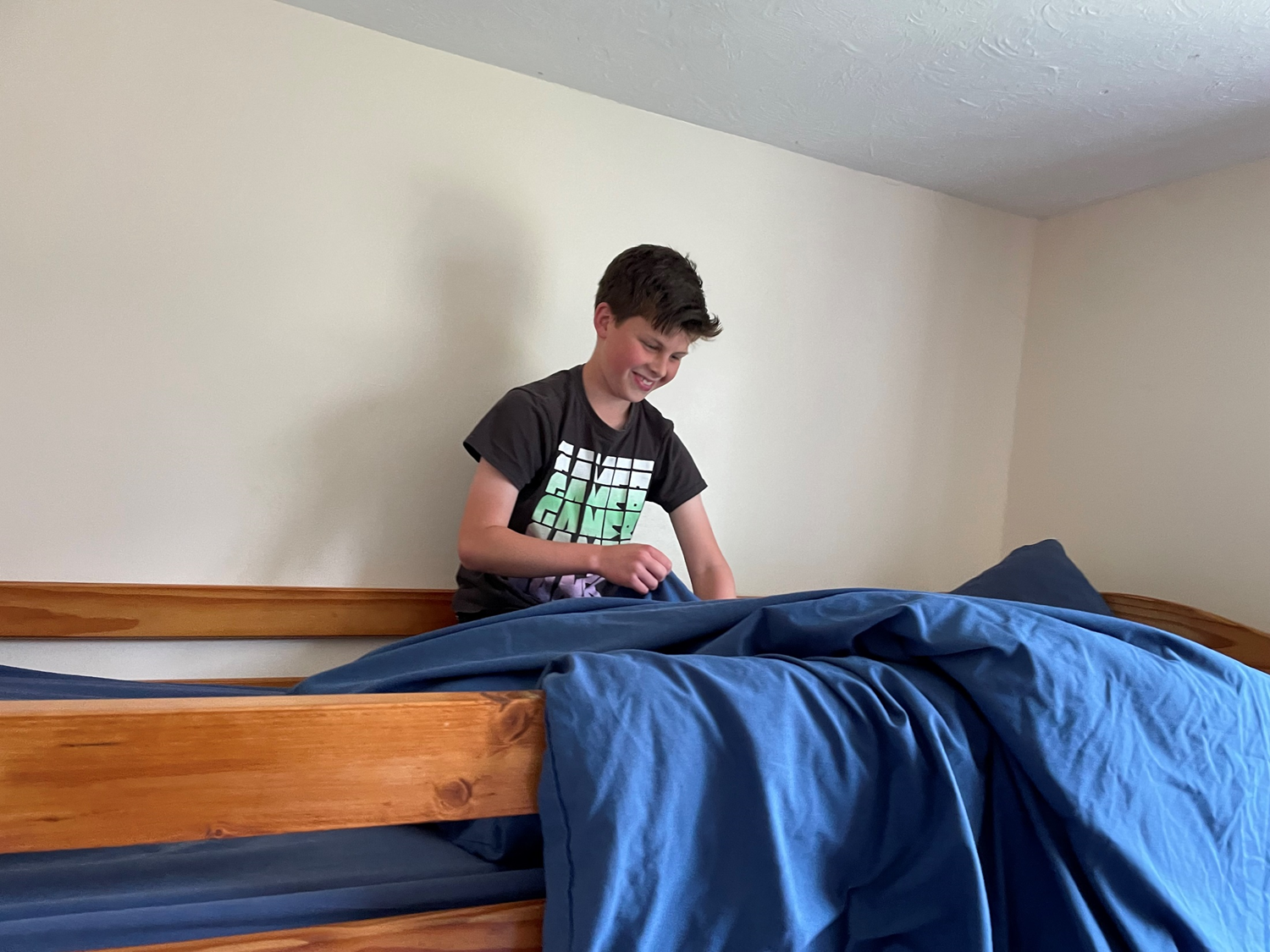 play football and other fun games before dinner.  There were two groups for dinner at different times (6:00pm and 6:30pm).  On the menu tonight was sausage and mash with mixed vegetables and gravy - it was delicious.  After cleaning and tidying our tables we had our pudding which was a lovely chocolate cake.

The evening activity today was a fantastic night walk; we saw some lovely views with many different animals.  Also we saw a trapped deer which luckily escaped when he saw us coming.  We stopped to take some group photos along the way.  We saw the old, dull, ruined Corfe Castle which dramatically rose over the hills.  We learnt that the word 'Corfe' means 'in the gap' because the castle is in the gap between two ridges.   After climbing down 324 steep stone steps we finally reached our Brenscombe Centre again.                 by Alfie. 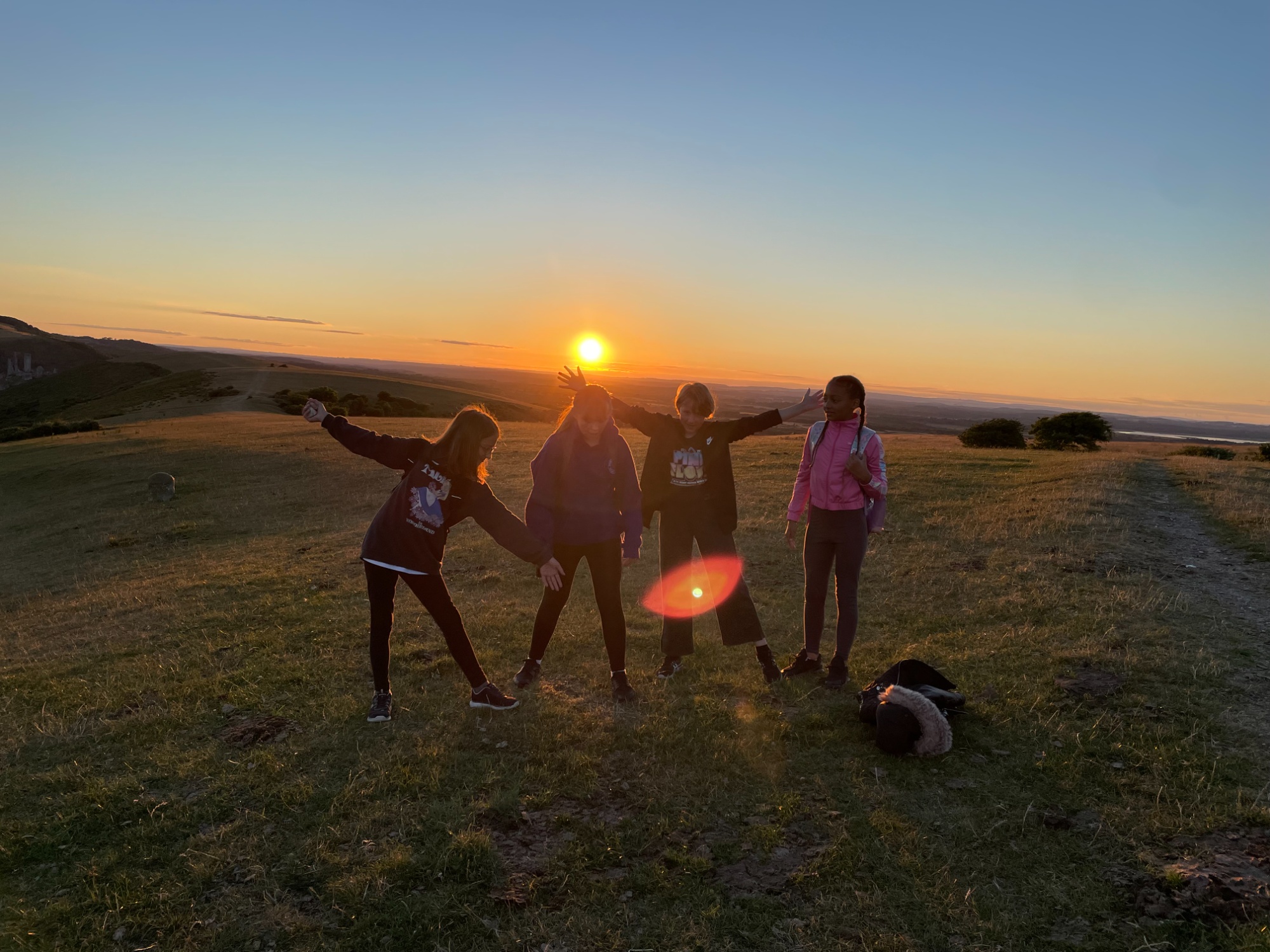 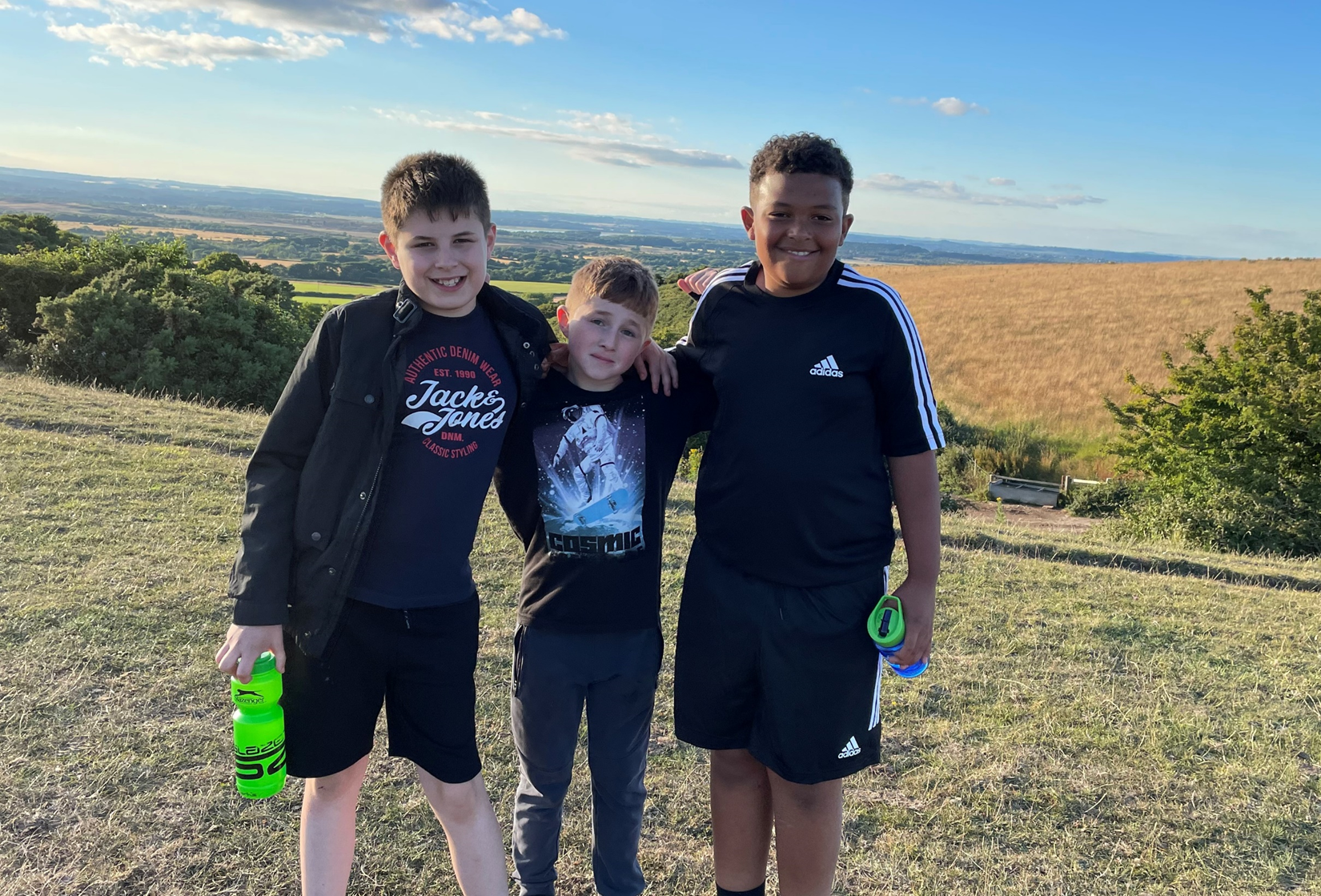 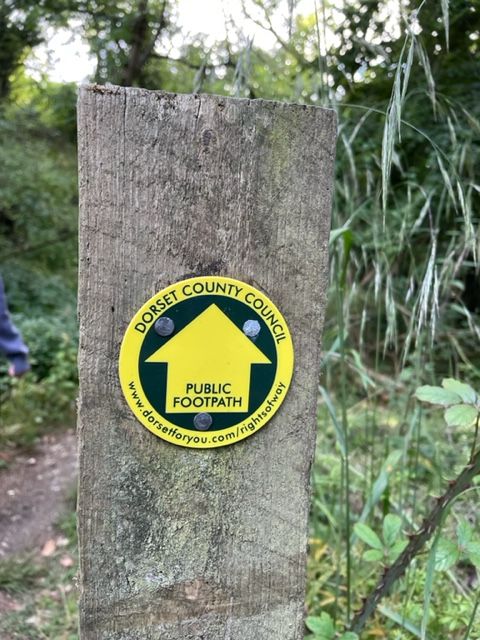 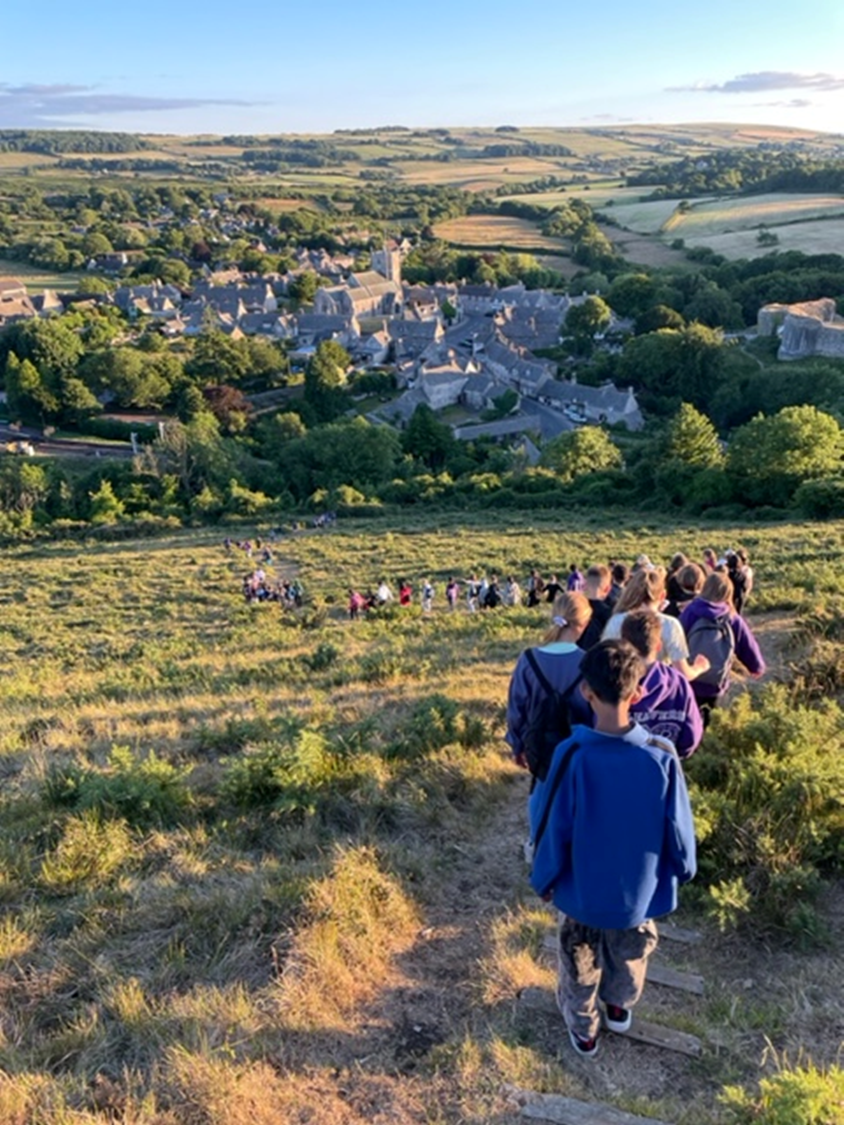 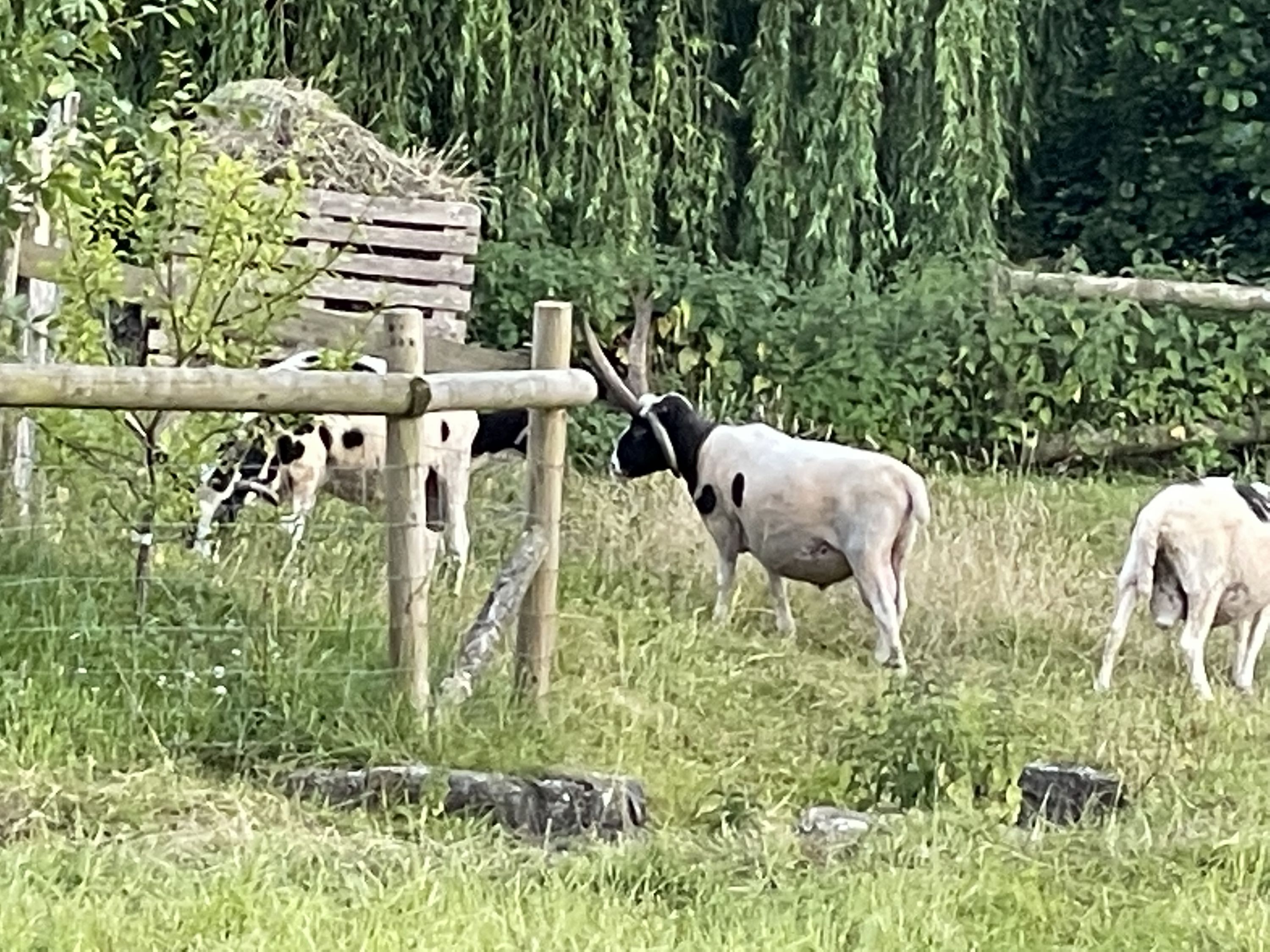 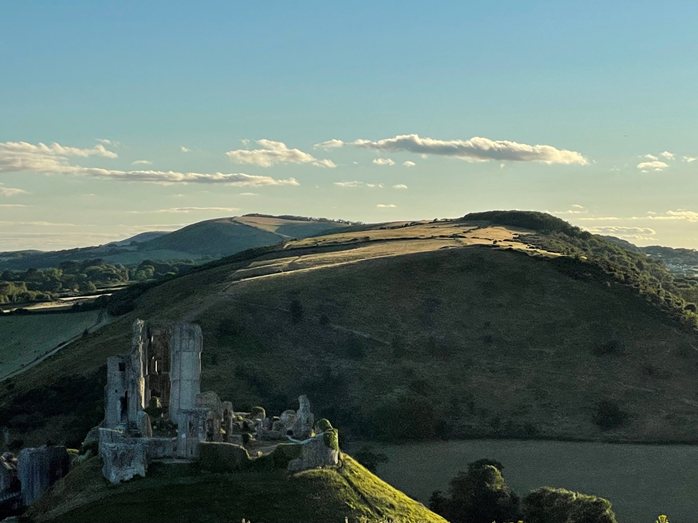 Sorry for the slow start tonight - the children have been too busy and are too exhausted to blog today so you get the staff instead.

Breakfast was good.  One of the children did an amazing cocktail of breakfast cereal, half rice krispies, half cocoa pops, which I really approve of.  The range of hot food was great too and gave them the energy they needed for the day.    Mrs Macaulay 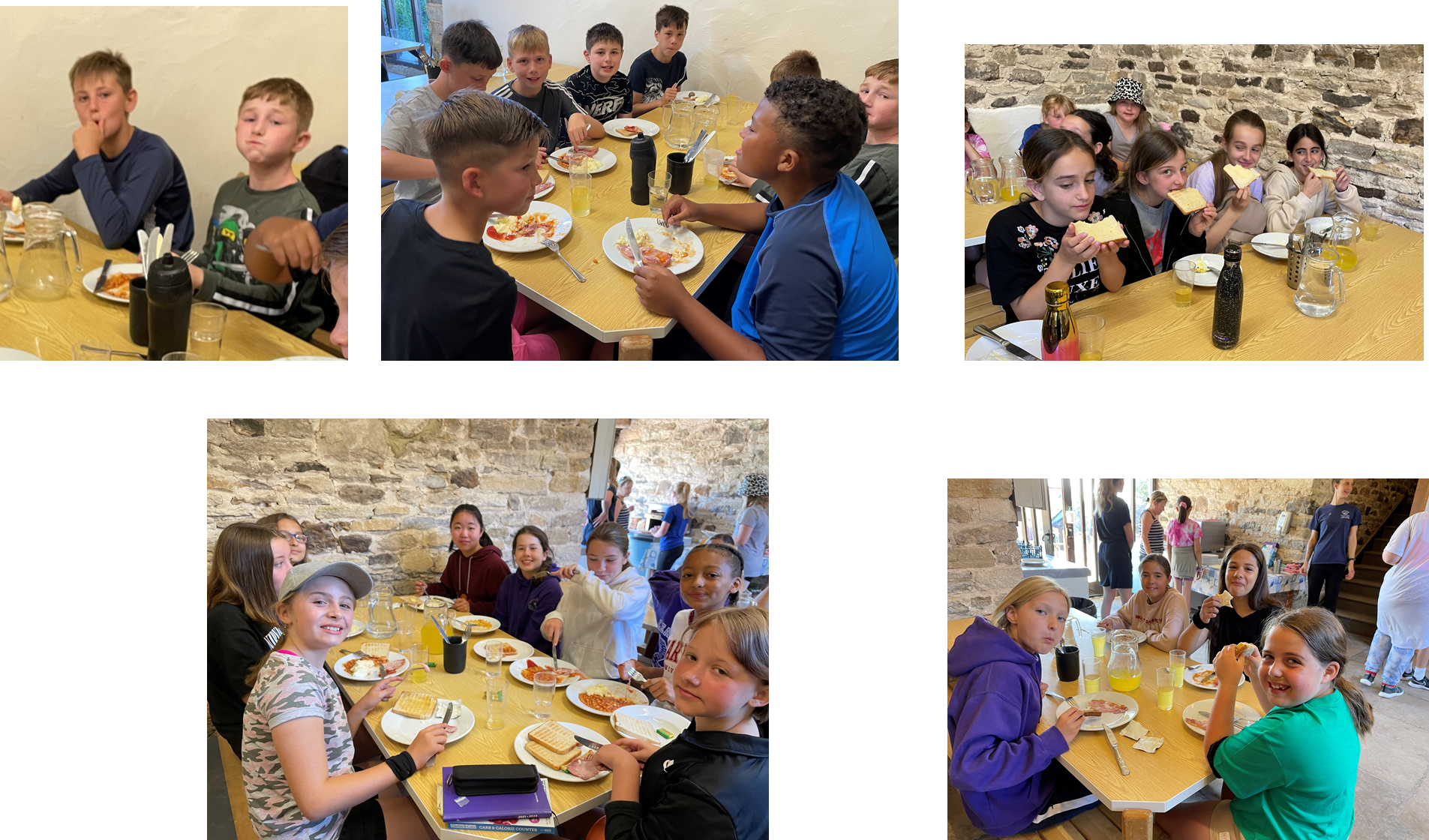 We then took the coaches to Cleaval Point - a private beach area owned by Brenscombe.  On the way there the children were delighted to see some deer, which then decided to race the coach - the coach won but only just!  After that we changed our shoes (at least those of us who remembered to bring wet shoes) and put on our buoyancy aids.  Half of us went out in the big canoe, and the other half went kayaking - then we swapped at lunchtime.  One of the highlights of our day at the beach was explaining the concept of 'no running water' to the children, which meant they had to use a compostable toilet - the thought of putting sawdust down rather than pulling a flush was hard to bear at first, but the children were pretty resilient and got used it it remarkably quickly.  The children were absolutely brilliant on the water, showing fantastic teamwork and just being amazing in supporting one another.   Carol 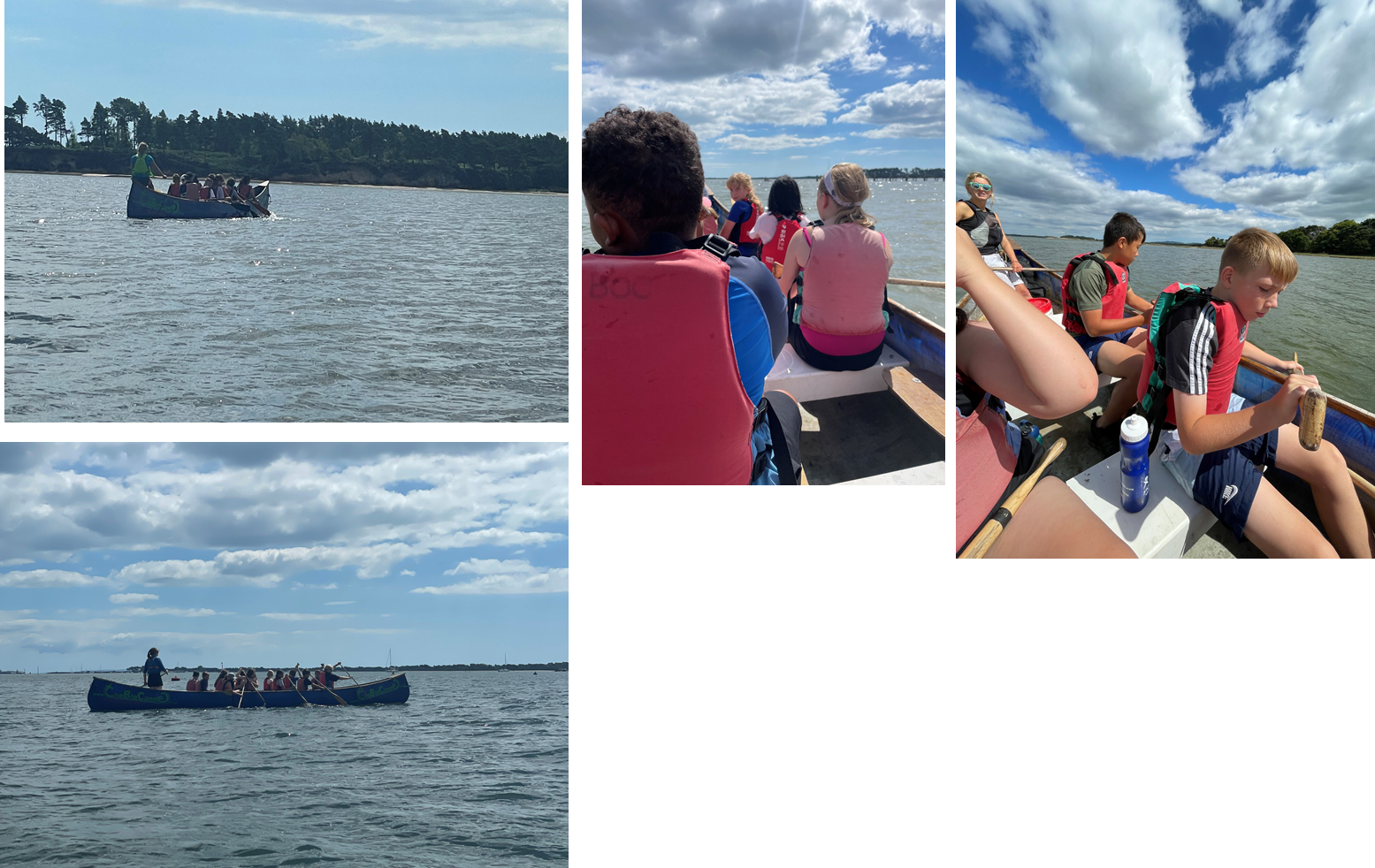 Apologies that not everyone was able to take their phone out on the water, but we hope this selection give you a flavour of the activities all the children were involved in today.

When the children canoed over to the beach on one of the islands, the children created Beach Art.  They were inventive, creative and varied in style - everything from Pride flags, to mermaids, to Corfe Castle.  The instructors picked a winner (or three - because it was so hard to choose).  We also re-iterated the 'Leave No Trace' philosophy that the children have learnt in Forest School - even making their sculptures on the shore line to make sure they were washed away.  Mrs Wyman

The reason we asked for lace-up old trainers to wear in the water beecame abundantly clear today as two children lifted their feet through the mud to find their shoe was nowhere to be seen!  Some were retrieved, but a couple weren't - sorry!  Riad.

There was much singing as the children worked together to co-ordinate their rowing to reach maximum speed.  They used some of their favourite songs, The Mermaid Song and The Pirate Song from Peter Pan, and even the Spongebob Squarepants song.

In between times the children enjoyed playing 'Splat' and the 'Paddle Game' - requiring great quick reactions, as well as some games on the water.  Mrs Collins

My favourite activity was the kayaking - I was really fast and I found it really good fun.  Mikey

I enjoyed the watersports because I got to work with my friends and we made a really good team.  We tried lots of different activities in our groups and people carried on persevering even when they felt like giving up.  Alice

Dinner this evening was delicious chilli-con-carne and rice.  Some children thought they didn't like it, but we suggested they tried a small amount.  Most did and many of those then came back for a full portion.  It is great to see the children trying, and liking, new things.  Mrs Bell

The children were brilliant today.  The instructors noted how carefully some groups listened today and the way the groups supported each other.  Well done Year 6.

In other news, the SATs results came out today and we are just so proud of all our year 6 children have achieved.  We are really looking forward to sharing the results with you.  Whilst watching the children today, you do get a sense of perspective on what is really important to them - which is so much more than SATs results - but we are so pleased with their academic outcomes too.  What a success story!

It was an early start on Wednesday; breakfast was sausages, tomatoes, beans and scrambled eggs, with a selection of cereals and toast.  After breakfast we got our things ready for the day (or at least some of us did!) and tidied our rooms.  We started our longish walk to the High Ropes course.  We walked over the fields then came to a narrow road; we had to walk in single file, which was quite hard, and shout 'car' if we saw a car coming so that everyone could step onto the verge.  Luckily the road wasn't very busy.

When we arrived at the High Ropes we put our safety gear on then we did different activities.  My group did the trapeze first - you had to climb up a pole, stand on the top, jump and grab hold of the trapeze.  I went to the top of the pole but didn't make the trapeze jump.  Luckily there was an option to just jump off the pole which was fun! 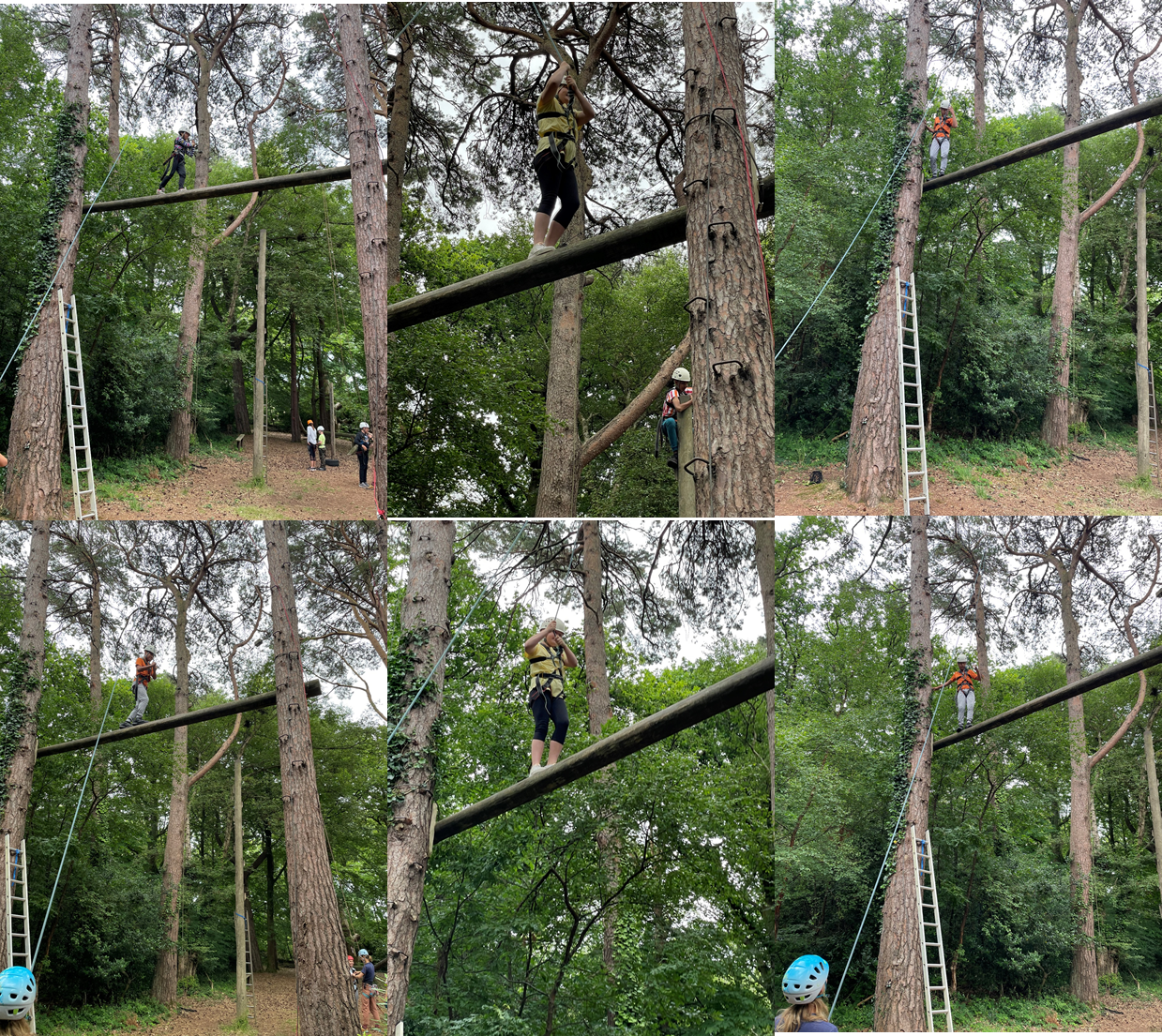 We also did a fun water activity where there was a cup of water and everyone had to touch it while going through a number of different obstacles.

Our favourite was the 'gladiators' course.  It involved a high climb and then you had the option of a zip line experience or the more challenging rings.  I tried the rings and got to the second last one (most adults can't do that! - Mrs Bell) and then I jumped down.  Yashti

The High Ropes was really fun - it felt like you were going to fall, but if you did it was completely safe. Harry

I enjoyed it because I tried something new that I never thought I would be able to do (the high beam catwalk) - I really pushed myself and I did it.  It looked really high to look up at, but when I awas up there it didn't seem as bad - but it was still very high.  Demi

At the High Ropes course, I enjoyed th climbing wall.  Wearing a harness, i climbed really high then jumped off and was lowered down on the rope.  The coming down was more fun than the going up!  Owen

This morning I went rifle shooting and did some archery.  My favourite was the rifle shooting because you get to use guns.  I was really good at it - I scored 54!  I did well because I have had two years of practice.   Ronnie B

This morning I enjoyed archery.  I liked it because we played a game called 'Zombies and Doctors' and two people went up against each other  Whoever won out of Zombies and Doctors went on to the other team.  I felt I was getting better at it as I did more archery.  Evie H

This morning my group did bushcraft and we made fire.  We used sticks of different thicknesses to make sure the fire took well.  We cooked bread and ate it - it tasted like marshmallows!  We also made hiding places for different forest animals - my group made a hedgehog house.   Laicee

I enjoyed making fire and tasty bread at bushcraft today.  I learnt that you had to be patient and add the sticks slowly.  Our fire went out because we had to leave it to get the bread, so we needed to re-light it.  We didn't have enough time so we used someone else's fire (Mikey's everlasting fire - which kept going out and coming back to life - we don't know quite how he managed it - but he set it up really well).  Addison

At first I was scared to start a fire in case I burnt my hand, but I told myself, 'I can do it, I can do it' - I did it a couple of times.  Demi

This morning my group were walking through the forest on our way to make hedgehog dens.  We stopped to play a 'hide and seek' like game - I was hiding in the leaves and when I stepped out there was a deer antler attached to my shoes.  Luckily there was no deer attached to it!  I felt excited as I have never found a deer antler before.  I learnt that you count each stump on the antler and add one year and that tells you roughly the age of the deer.  The deer must have been 5 years old when he lost his antler.  Isla F

This evening we enjoyed a wonderful bonfire - some of us on the field and some of us in the woods.  The children acted out their favourite activity of the week - from archery, to kayaking, to high ropes, to rifle shooting - a varied list indeed.  We then enjoyed some giant marshmallows toasted over the fire on long skewers, all kindly donated by FODS to make sure the children have a wonderful last night experience here. 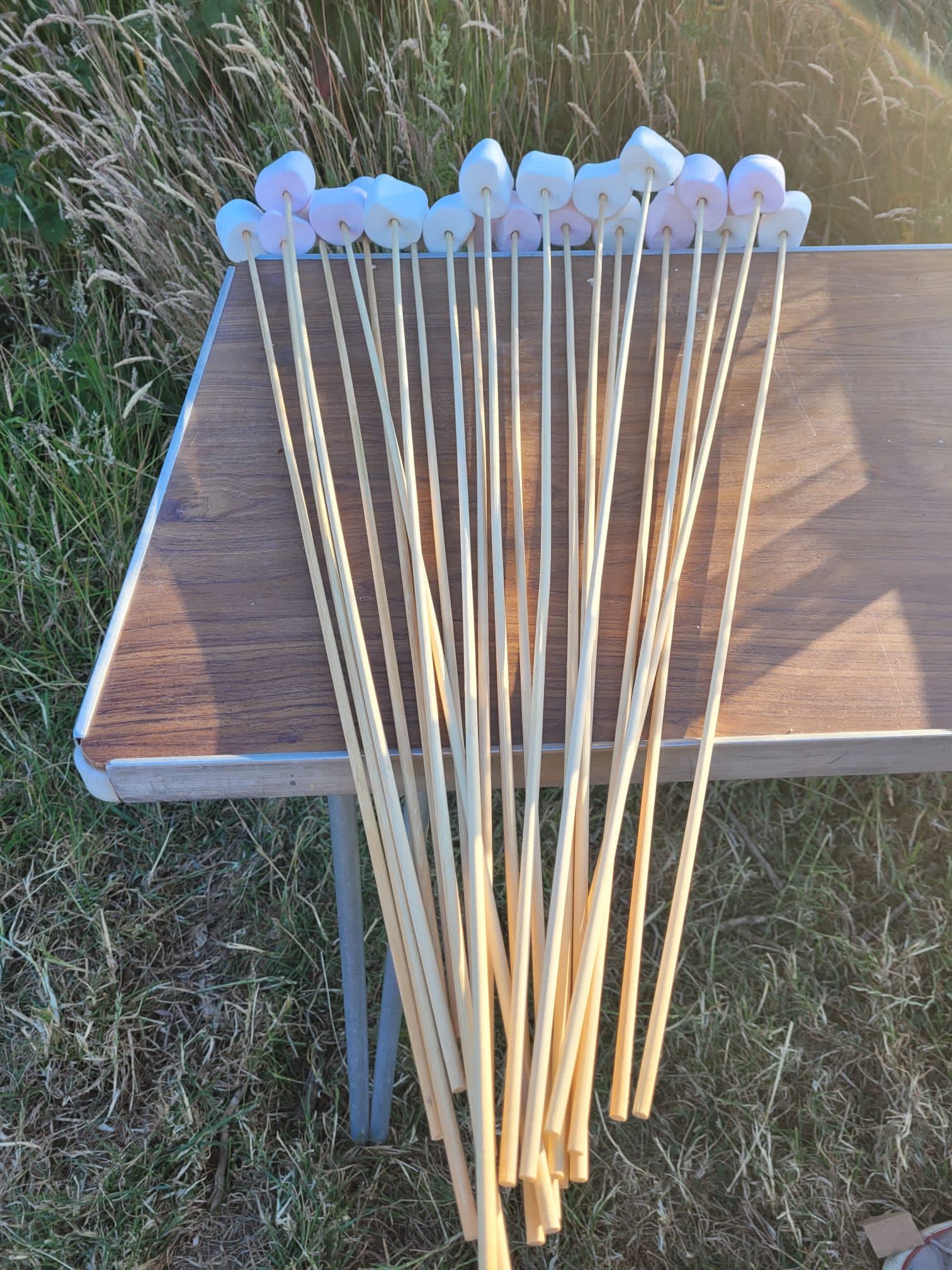 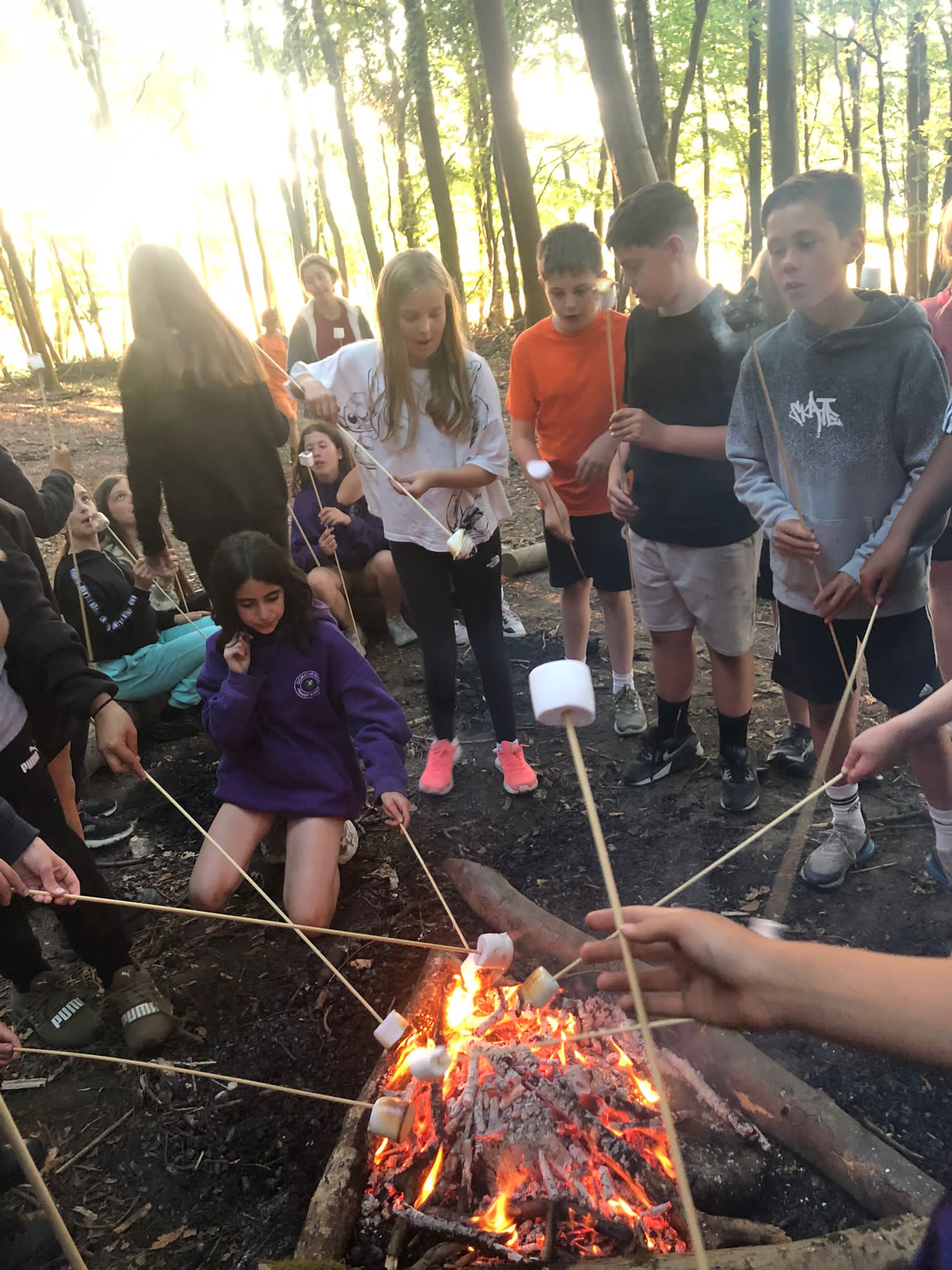 To see more photos of our adventures, click on 'more photos' to the right, or below if you are on a phone, then click one of the dark images to take you into the gallery.